The Giant’s Footprint is a natural Stone in Cornwall, with a foot shaped impression in it, the boulder is in the valley leading to the cliffs and coastal footpath nr Chapel Porth. It was said to be the foot mark of the Giant Bolster of St Agnes legend.

In the time of giants in the Penwith area of Cornwall, there lived a particularly troublesome giant called Bolster, who was of such enormous stature that he could stand with one foot on Carn Brea, and the other on the beacon near St Agnes, a distance of 6 miles. Bolster himself was a terror to the surrounding countryside, stealing sheep and cattle from the ordinary Cornish people.

At that time in the same area lived St Agnes, who was a champion of early Christianity and a pillar of strength for the local people. Bolster became infatuated with St Agnes, and eventually fell in love with her. Tired of the attention of the giant, and wishing rid of this evil brute, she asked him to prove his love for her by filling a hole in the cliff at Chapel Porth with his own blood. Bolster considered the task to be easy due to his huge size.

Bolster’s Stride: from the Beacon to Carn Brae 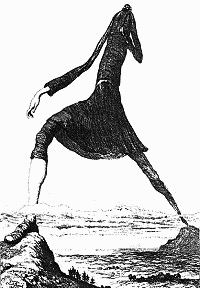 Bolster went up to the cliffs at Chapel Porth, plunged a knife into his arm, and waited for the hole to fill with his blood. The blood continued to flow like a crimson river, and the giant grew weaker and weaker, until he lost so much blood that he died. The hole actually led from the cliffs into the sea, a fact that St Agnes had kept secret. The blood of Bolster is said to have stained the cliffs at Chapel Porth and the red mark is still visible today. (http://www.mysteriousbritain.co.uk/england/cornwall/legends/bolster-and-st-agnes.html) 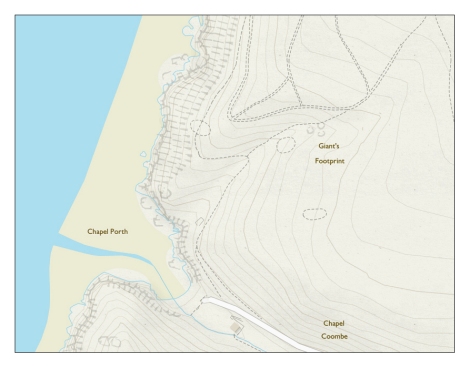 Izzy on cliff path, But no Giants Footprint

The Beacon, No Giants Footprint

Izzy & Jack But no Giants Footprint